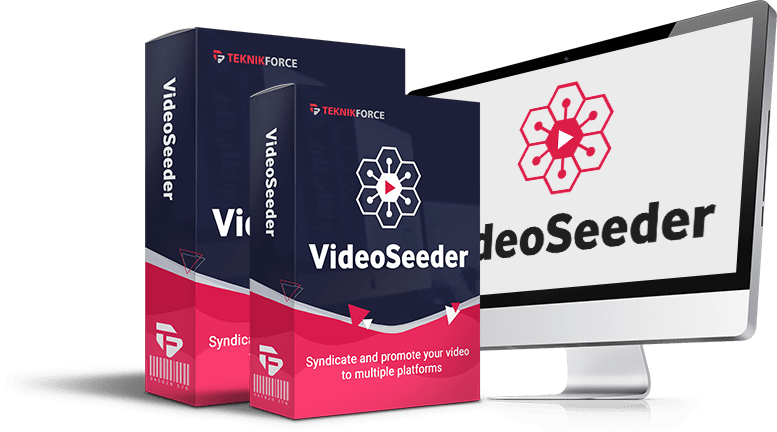 I noticed there’s a new software just launching for video sharing called Video Seeder and I wanted to say a few words about it.

Here’s the gimmick: it’s a desktop software that installs and runs on YOUR computer, so Youtube thinks you’re uploading videos manually from YOUR computer.

They say this provide some kind of protection from getting banned, or extra ranking juice because it’s from your computer and not the cloud.

I personally have run automated, API-based video uploads at the rate of one per hour, for days on end – I did that a couple of years ago and I’m still ranking for my term on both Google and Youtube. And I have NEVER had an account banned for doing such a thing.

According to my research, they actually like having people use their API and you can rank just as HOT with a cloud-based API as you can by uploading with your own computer.

But certainly there are some advantages to having a desktop software to upload and distribute your videos – mainly because it does emulate a human on a residential ip address. So you could run in on a VPN without using your own bandwidth.

I’ve been working on video sharing systems since my plugin VVC Syndicator, which I released in 2013. I tried doing this with a plugin a couple of times and it didn’t work out… Google changed things so that the API requires a specific website to call back to and a plugin became difficult without forcing people to get involved creating their own apps on Google.

Having an emulator-type software sidesteps that whole issue because it just automates the use of a browser on your computer to upload videos, then gets the links back and shares and embeds them over your other accounts. So I obviously like what this software does though I haven’t tested it.

And if you want to get technical, Video Seeder is against Youtube’s TOS because you’re not supposed to scrape with automated browsers. But the point is, Youtube will never know because the software is put together in such a way that it really seems human.

Personally, since 2014 I have been building up my own, very cool web based software that does pretty much all the same stuff that the seeder does (except it uses “kosher” APIs)… it’s called TheWorkz with its component software TapVIDz. You may already have it.

TapVIDz itself is pretty expensive but you get the entire component set and agency usage – fully cloud-based so you don’t have to tie up your computer and you can set all kinds of stuff up for multiple clients – campaigns that run hands free using our TapVIDz ReLOADz system.

It’s all integrated into my “foundation system” so you only have to save your accounts once and then all the component software uses the same database to do operations.

It’s just a matter of saving your accounts and apps, then cobble together strategies for your videos, blogs and social sharing. It’s pretty cool.

Of course, all my USM members* get all my software tools at agency level and full support from me whenever required, in fact I often set up parts of the system for my members so they can get started quickly.

But to be fair… my TapVIDz system may be overkill for someone who just has maybe one or two Youtube accounts and doesn’t mind using their own computer for video bandwidth. Video Seeder MAY be just perfect for you.

Cyril Gupta is the vendor and I’ve heard good things about him.

*PS: just a reminder – for 24 hours only on “Black Friday” I’m going to be running a phenomenal sale on the “lifetime” version of my USM Membership – it’s gonna include ALL the tools I’ve described above, plus a LOT more… for a one time payment that’ll be so low, it’ll be “an offer you can’t refuse” 🙂 mark the date November 29th 2019